First of the Gay Mermaid Playlists ✨ 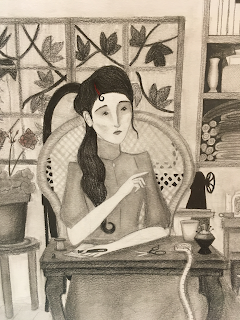 Something that really helps me when I’m struggling to commit equitably to my ensemble cast of gay mermaids is having different music I listen to to get into the headspace of each one. I’ve always wanted to be so organized that I had playlists for each of my characters to actually share, and I swore I would do that for all their birthdays in 2019 but then immediately missed Angela’s (January 17).

Last week, after I got invited to display my drawings at KPL for the month of December (!!!), I decided it might be cool to link playlists for each character with the most important songs I’ve collected over 11 years for each one? So I’ve been working on that for a couple of weeks. Today’s Jehona’s 130th birthday, so here’s hers. It’s liable to change between now and December, but I don’t think it will change much. I stole half the songs from Meghan’s Tumblr years ago, fair and square. (P.S., Derdriu’s playlist is totally bangin if you’re into Irish music you can swordfight + swashbuckle along to.)

I think I always forget how much I love Jehona. Every character I write has something from real life; that is their “spark of life.” If it doesn’t happen, I scrap the character. Like Derdriu, Jehona is a character who encompasses many “sparks” from many humans I have loved. The silence around Jehona and her near total solitude help her fade into the wallpaper, but she’s one of the biggest things in the Isles to me. She’s been through outrageous harm, but yet her Glandula Musa enables empathy so powerful she can experience someone else’s pain for them if she wishes to. It’s part of why she’s so reclusive. No one ever says, “Jehona was my favorite character,” not even me (let’s blame Derdriu 🔥), but like Derdriu, she’s one of the precious few who make me look up from my writing every now and then, surprised to remember that she never really lived at all because she has been such a very real friend to me, and I think that’s the most a writer could want.

As my boy Cyrano de Bergerac put it, “Lorsque j’ai fait un vers et que je l’aime, je me paye en me le chantant a moi-mème.” (“When I write a verse I love, I pay myself by singing it to myself.”) Jehona’s arc is one such a verse. 🖤
Posted by Charlotte Victoria at 3:34 PM No comments:

Jehona is one of my favorite mermaids, and with Fredeline is one of the only two characters I ever created in response to a friend asking me to make up a mermaid from the same country as them. However, Jehona's backstory is largely based on things I've been told about my great-grandmother Angelina, who was Sicilian and who I like to think approves (she died in 1957 but I want what I want) of the whole women's studies thing.

After J's disastrous arrival on Ridley Island in 1906, it was Angela who took her on as an apprentice seamstress. Due to choices she'd made in her teenage years for her and her family's survival (as a human, J was a sworn virgin), Jehona had no idea how to do things like sewing upon arrival, but under Angela's tutelage, became a master seamstress. However, unlike Derdriu, J lacks the community of a guild and has spent most of her ~125 years inside this dim little room – working all alone since Angela's death in 2008 – dreaming of becoming a doctor instead, as foliage increasingly occludes her only window. Jehona is a survivor and instead of running from pain, became a powerful empath who quietly does whatever she can to help those she loves.

Going to post a kinda long excerpt from The Undine Isles here because it's one of my all-time favorite scenes and I cannot will not must not abbreviate it, see below:

But I followed her inside and up the stairs. I’d only been inside Jehona’s bedroom the once, and it had been without invitation and in the dead of night. Now I noticed the character of the room in this filtered light. It was more den-like than Nona and Pam’s bright, elegant one, and smelled of coffee and the giant red geranium near Jehona’s bed, which was positioned just right to soak up all the natural sunlight. The windows were overgrown by thick green vines, so even at midday the room was lit by dozens of candles on tables, the wall, and a small iron chandelier that hung from the ceiling.

Jehona’s side was full of poetry anthologies and classic novels on shelves. A few old maps and posters of Klimt paintings that hung peeling from the wall were fastened in place by rusted tacks, and every horizontal surface seemed to support a vase. An antique stethoscope hung from a handle on her vanity.

The little room also served as Jehona’s sewing workshop. The corner nook at the foot of her bed was packed with shelves of fabrics—silks and gossamers, cotton and corduroy, and every other color or pattern imaginable. Some had brown paper tags dangling by copper safety pins. A glass jar sat precariously squeezed onto the edge of the shelf, full of gleaming antique scissors—silver, copper, brass, in different sizes, and unruly tape measures sprawled here and there from shelves and across the floorboards. And there were bins of thread on wooden spools, a gargantuan velvet pincushion, and an old adjustable dress form standing in front of it all. On the opposite side of the room, by the geranium, was an ancient pre-electric sewing machine, which shone black in the filtered sunlight.
Jehona wheeled out a brass cheval mirror from the corner by her bed and stood me in front of it. Then she started to measure me.

It was the first time one of the mermaids had touched me barehanded, and it was this mermaid. This quiet little mermaid with her period clothes and tiny feet, this mermaid who still seemed to be learning how to look at me. Jehona seemed a little surer of herself in this room. Her fingertips were small and warm, her hands gentle. It tickled slightly as she wound her paper tape measure around my neck, my chest, my waist, my legs, marking my measurements with a chipped nub of pencil on a scrap of yellow paper. She measured the length of my arms and then handed me the 1 cm. end of the measure.

I looked at her.

“Hold like so between your legs,” she said. I obeyed. Jehona lowered herself to the floor and read my inseam measurement, writing it down with the others. “Falemnderit,” she said.

“Not yet,” I answered, “but I love learning new languages.”

She gave me a long, appraising stare. Then she pushed the mirror back into its corner by its brass oval frame, and wheeled out the mannequin in its place.

“Um,” I started stupidly. Here was another language I had never really mastered. “Not too loose, but not too tight either.” I didn’t know if I was explaining myself. “I’m sorry. I’ve never had someone make me clothes before. This top you gave me is a nice fit.”

Her small white hand flattened the collar against my blouse. I could feel my heart beating inches from her hand.

“Just so,” she said. “I work now.” She ferreted a few yards of baby blue cotton fabric from the shelf.
“Um… thanks,” I said. I wasn’t sure if she meant for me to go, but I left her there. 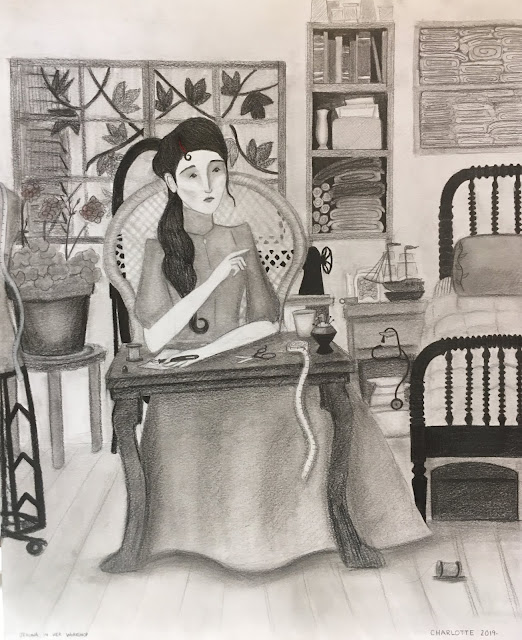 Posted by Charlotte Victoria at 7:13 PM No comments: